LA Times: Ayurveda treatments, a must at spas

The spa as a spiritual place

Exhale Mind Body Spa in Hollywood and Santa Monica and the Chopra Center Spa in Carlsbad are among centers that address the spirit. 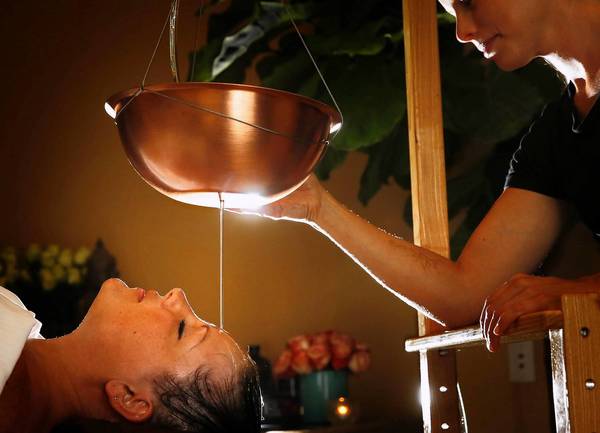 Spa fans want more than sloughing off dead skin or soothing aching muscles from those pampering places of eucalyptus-scented bliss. And businesses are transforming into mind, body and soul temples of wellness to meet the demands of people increasingly eschewing traditional houses of worship and pursuing alternative paths to spiritual connection.

“Spas can be inspirational places where I’ve seen many people have transformational experiences. With people not going as much to church, spas are a natural place to have some of these experiences,” says Susie Ellis, who has worked 40 years in the spa industry and is president of SpaFinder Wellness, a marketing company.

Since ancient times, rituals such as fasting and cleansing have been used to shape the body “so as to attune it with the divine and experience a spiritual connection,” says Mayra Rivera Rivera, an assistant theology professor at Harvard Divinity School. “An increased emphasis on the body as a way to enrich the self is part of a broader cultural trend in our times. Caring for and especially improving the self are seen as salvific.”

Religion’s complex history includes discipline and even denial of the body, so Rivera says what’s new in the spiritual spa trend “is the element of pampering.”

Nancy Furst is a spiritual counselor and intuitive at the tony Ojai Valley Inn & Spa. “I’m there to listen and reflect your spiritual essence and wisdom and be a conduit for spirit or God,” she says, adding that for the many clients who have had negative experiences with organized religion, the word “God” can be an unpleasant trigger.

“You can call it God, spirit, universe, Buddha, Allah. The words really don’t matter,” Furst says. “My work is about awareness of a higher consciousness, a higher power of creation.”

“Anytime someone can get to that place inside where their true person can shine, that creates a spiritual experience,” says Michael Tompkins, chief executive of the Miraval resort in Tucson.

Spas such as exhale Mind Body Spa in Hollywood and Santa Monica and the Chopra Center Spa in Carlsbad address spiritual enhancement and imbalances, with treatments such as acupuncture.

“One of the therapies we offer at exhale is vibrational healing,” says Robert MacDonald, exhale’s director of healing. “We use tuning forks to shift the energy of the body, mind and spirit to profound effect. Working with acupuncture points, meridians and chakras, we are able to create deep relaxation and healing.”

Michael Murphy and Dick Price co-founded the New Age pioneering Esalen Institute in Big Sur in 1962, with the mission to realize “human potential through experience, education and research.” That includes “healing arts” such as massage.

“When we started out, our inspiration was to open up the undiscovered country of the spirit to this historic breakout of consciousness we saw over the horizon,” says Murphy. “We preach that the core of human nature, whereas it is capable of evil, is tilted toward the good. But not necessarily the Virgin Mary, Jesus on the cross or any religion in particular…. There is something deep down inside of us that is universal. It’s about getting beyond the things that divide us.”

Religion is changing in the U.S. Forty-six million Americans, a third of adults younger than 30, say they have no religious affiliation — an increase from 15.3% of Americans to 19.5% in five years, according to the Pew Forum on Religious and Public Life. A third of these unaffiliated classify themselves as “spiritual” but not “religious.” If you’ve been on a dating site, it’s a familiar phrase: 16.2% of eHarmony and 20% of Match.com members identify as SBNR.

But don’t get the wrong idea about whom you’re chatting up.

“Many in this group believe in God,” says Greg Smith, a Pew senior researcher. And three-quarters of Americans say prayer is an important daily part of life, the same as 25 years ago.

The International Spa Assn. defines spas as places to encourage the renewal of mind, body and spirit, perhaps not so different in ideal from the medicinal hot springs that have long attracted people.

Spas connect the word “spiritual” to an array of services, says Spa Finder’s Ellis. Among those she cites in her 2013 spa trend report:

• Mindful massage, including practices such as chi nei tsang, an ancient Taoist therapy that focuses on deep abdominal massage to help release the constricted flow of energy said to be caused by negative emotions.

• Ayurveda, a holistic system of medicine with origins in India. It is said to promote balance in body, mind and spirit.

“A person grows up today with a Hindu neighbor, a Buddhist neighbor, a Muslim neighbor, a Jewish neighbor, and you ask yourself, well, does that mean they’re completely wrong? Are they going to hell?” he says. “You begin to have less confidence that any religion has a monopoly on truth.”